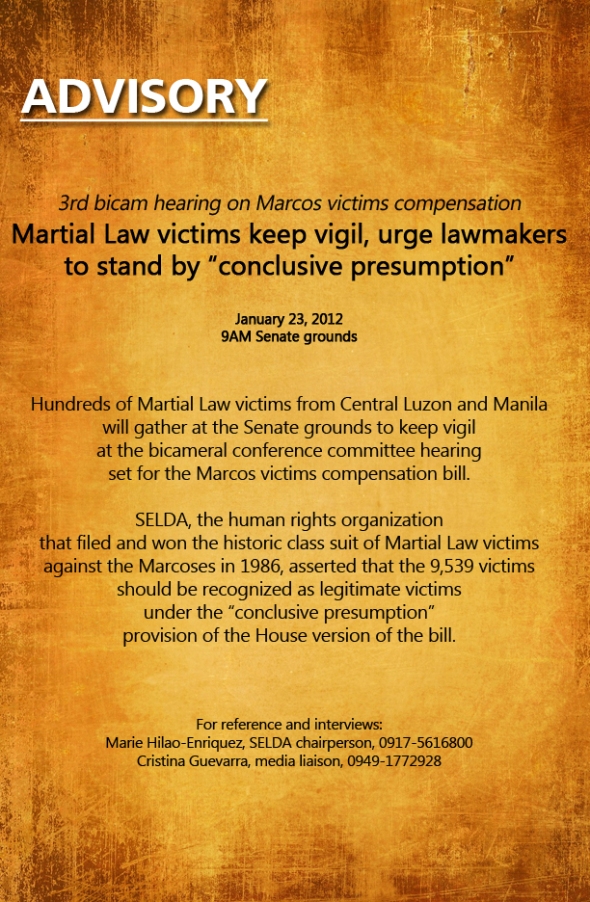 As Karapatan calls on Noynoy, Congress to pass Marcos victims bill before elections

Karapatan today called on Pres. Noynoy Aquino and Congress “to pass the version of the Marcos victims compensation bill that is acceptable and judicious for the victims of human rights violations during Martial Law and their relatives.“

Karapatan secretary general Cristina Palabay said Aquino and both houses of Congress should not delay the immediate passage of the acceptable version of the law, have it passed and signed into law before it gets frustrated again with the frenzy for the upcoming election period. “Since the landmark judgment in Hawaii on the class suit against Marcos, several sessions of Congress have been remiss in rendering justice and indemnification for Marcos victims through the appropriate legislative measure. Aquino should certify this as an urgent measure,” she commented.

The House of Representatives and Senate have formed a bicameral conference committee to deliberate on versions of the bill from both houses.

Palabay noted that there were “snags” encountered during the debates of the bicameral conference committee, citing the positions of Sen. Joker Arroyo and Akbayan Rep. Walden Bello which the group deems as “pro-Marcos” views, as the points of debates they inject in the bicameral meetings go against the principle of the proposed law, which is to render justice and indemnification to Martial Law victims.

“Both lawmakers denigrate the persevering efforts of the victims when they disregard the judgment of the US court in the landmark class suit against the Marcos. By asserting that there should be ‘disputable presumption’ for all victims, they are providing the Marcoses with another malicious legal tactic to contest the judgment in Hawaii, which found former Pres. Ferdinand Marcos guilty of rights abuses during Martial Law. This proposal is clearly in favor of the Marcoses,” Palabay explained.

Palabay said Karapatan and the Samahan ng Ex-detainees Laban sa Detensyon at Aresto (SELDA), a group of former political prisoners which led the filing of the class suit in Hawaii, insist that “conclusive presumption” should be given to the 9,539 victims who filed and won the class suit in Hawaii to give due and appropriate recognition for the ‘guilty’ judgment on Marcos.

Karapatan also said the two legislators should be reminded of the principle enshrined in the United Nations Universal Declaration of Human Rights (UN UDHR) that recognizes that right of peoples, who are confronting tyrannical and oppressive regimes, to take up arms against these kinds of governments, such as the Marcos regime.

“By proposing to exclude as ‘victims’ those who took up arms and also suffered rights violations during Martial Law, Arroyo and Bello are promoting principles that undermine the struggles of the Filipino people during Martial Law and, in effect, are undermining the universally recognized right of peoples to oppose tyrannical regimes, in whatever form they deem necessary,” Palabay concluded.

The Samahan ng Ex-detainees Laban sa Detensyon at Aresto (SELDA), a group formed by Martial Law victims that led the filing of the historic class action suit against former Pres. Ferdinand Marcos in Hawaii, today reiterated its position on the issues being debated upon at the bicameral conference committee on the Marcos victims compensation bill.

Marie Hilao Enriquez, SELDA chairperson and daughter of one of the original plaintiffs in the Hawaii case, enjoined members of the bicameral conference committee “to adopt provisions which are acceptable to the victims and their relatives, instead of undermining their arduous and persevering efforts for justice and indemnification.”

“For one, we are deeply disappointed with the utter disregard shown by Sen. Joker Arroyo and Rep. Walden Bello when they dismissed the efforts of the 9,539 victims who filed the class action suit in Hawaii by pursuing a provision on disputable presumption. Such provision is dangerous, for if this is included and passed into law, the victims who filed and won the Hawaii case will once again undergo and endure the painful and rigorous process to prove that they were indeed violated during Martial Law. We are adamant that conclusive presumption should be the principle adopted to automatically consider the 9,539 victims who pursued and won the Hawaii case under the proposed Philippine law,” Enriquez opined.

SELDA agrees with the Bayan Muna Rep. Neri Colmenares, himself a victim and among the class members in the Hawaii suit, in his position asserting for conclusive presumption, as this is in fact an acknowledgement of the State of the judgment of the US courts, which found Marcos and his cronies guilty for the human rights violations under Martial Law. “To run counter to this position is tantamount to opening a Pandora’s box for the Marcoses to evade the US courts’ judgment,” Enriquez said.

The human rights organization added that this is not to discriminate on other victims who failed to file and join in the class action suit. “We wish to remind our legislators and the public that the reason we are pushing for a law to indemnify martial law victims, is to finally enforce the Historic Hawaii Class Suit judgement which we won in 1992.” Enriquez declared “The Philippine government required that a law must be made to indemnify martial law victims from the ill-gotten money the Swiss government returned to them in 2003. They should be made a priority.”

“It will be the height of historical amnesia and ignorance to only recognize the rights violations against those who ‘peacefully exercised their rights,’ as if the situation during the Martial Law years would permit such exercise. Ang mga nagmartsa ba at pinagtanggol ang sarili sa mga miyembro ng Philippine Constabulary, at yung mga sumali sa New People’s Army ay walang mga karapatan? All those whose rights were violated should be rendered justice,” Enriquez said.

Finally the group reiterated its position to be included in the Human Rights Claim Board: “When Selda filed the now historic class suit vs, Marcos in 1986, we took on the research, interview and gathered documents that were brought to the Hawaii Courts. Many victims became members of Selda and we continue to have chapters in various parts of the country. The help of members in identifying and verifying victims would be valuable in the process once the law is enacted and implemented.” Enriquez ended. ###

We are twice victims of injustice — Martial Law victims

We are twice victims of injustice — Martial Law victims

On the eve of the 40th year of the imposition of martial law, victims of human rights violations under the Marcos dictatorship pressed on their fight for justice and indemnification as they rallied once more at the foot of the historic Mendiola Bridge.

“We fought for justice under the dictatorship yet, 40 years later we are still victims of injustice,” Bonifacio Ilagan, Samahan ng mga Ex-Detainee Laban sa Detensyon at Aresto or SELDA said. “Many of our colleagues sacrificed their lives in the hope that one day they will see their countrymen free from want and fear.”

Ilagan pointed out that, “many of our colleagues were killed, disappeared, tortured and jailed, but after filing and winning the landmark human rights violations case vs. Ferdinand Marcos in Hawaii, those who were responsible for these atrocities have not been punished. Worse, they are back in power.”

Martial law activists have pushed for the passage for the indemnification bill since 1998.They lambasted President Aquino for “sitting on the Marcos Victims Compensation Bill.” The human rights group expected more from the current administration, saying that “Noynoy, the son of a martial law victim should deliver justice to the victims and hold the perpetrators of human rights violations accountable for the crimes committed against thousands of Filipinos. But, the Marcos’ Victims Compensation Bill is again in for a tough ride.”

Senator Chiz Escudero has, on many occasion, said that the report by Committee on Justice and Human is ready for the plenary debates. “We have received the same reply for the longest time. Is the government serious about this? Or are the senators intimidated by the presence of a Marcos in the Senate,” Ilagan asked.

SELDA is also apprehensive with some of the provisions in the bill that they believe do not reflect the interests of the ML victims. Thus, it reiterated its earlier position, among others, the recognition of all 9,539 victims and class suit plaintiffs who won the case against Marcos both in the US and in the Swiss courts.

SELDA members believe that the passage of the indemnification bill into a law is a step towards justice, “not so much for the compensation but more importantly, the recognition that injustice was committed to thousands of people during martial law. This should serve both as a reminder and a warning to all the administrations that people will not take injustice blindly. As proven in our recent past, there are many other avenues to pursue justice,” said Ilagan.

“We have no material wealth to pass on to our children and families. But so long as oppression and exploitation remain, this undying fervor to struggle for what is right and just will be our legacy to them and to the Filipino youth. Tuloy ang Laban! (The struggle lives on!)”  they concluded. ###

“It’s about time that the victims under the Marcos dictatorship be accorded a component of justice by recognizing the sacrifice they have made in fighting for the people’s rights and freedoms. Pres. Benigno Aquino III and House Speaker Feliciano Belmonte should make good their word in ensuring that the long overdue measure in Congress seeking indemnification for the victims of Martial Law be immediately passed.”

Thus said Fr. Dionito Cabillas, Secretary General of the Samahan ng Ex-detainees Laban sa Detensyon at Aresto (SELDA), as Cabillas and Martial Law victims trooped today to the House of Representatives in a hearing of the Committee on Human Rights on the proposed measures on indemnification of the victims of Martial Law.

Cabillas said that it has been more than two decades ago since the Marcos victims, led by SELDA, filed the class action suit against Marcos for crimes against humanity. In September 1992, the US Federal District Court of Hawaii decided in favor of the 9,539 Filipino victims and ordered the Marcoses to pay the victims almost $2B for damages. In 1997, the Swiss Supreme Court ordered the transfer of the then US$540 million Marcos ill-gotten Swiss deposits to an escrow account of the Philippine National Bank, in favor of the Philippine Government, and in which the victims who filed the class suit in Hawaii be considered by the government in the release of the funds.

“SELDA fully supports the renewed drive led by Bayan Muna Rep. Neri Colmenares, himself a Martial Law victim, Rep. Teodoro Casino and the progressive legislators’ bloc who refiled two bills, House Bills 954 and 1693, for the immediate passage of measures for the recognition and compensation of victims of human rights violations during the Marcos dictatorship. The four (4 – Corazon Aquino, Fidel Ramos, Joseph Ejercito Estrada and Gloria Macapagal Arroyo) administrations after Marcos have not rendered justice and were unable to decisively pass legislation to compensate the victims,” Cabillas said.

He said that the bill was already declared a priority legislation under the Arroyo administration, yet it was kept at bay even if the measure was already in its 3rd reading in the 14th Congress.

Cabillas also reiterated that the Hawaii class suit list of victims who remain as parties to the Human Rights Litigation Against the Estate of Ferdinand E. Marcos (MDL 840) in the United States Federal Court System in Hawaii, must be recognized and given priority in the House bill for compensation. They must be considered automatically as victims of human rights violations and must be considered first in the indemnification; additional victims who did not participate in the class action suit in Hawaii may undergo a process in which a determination that they were victims of human rights violations will be conducted. #